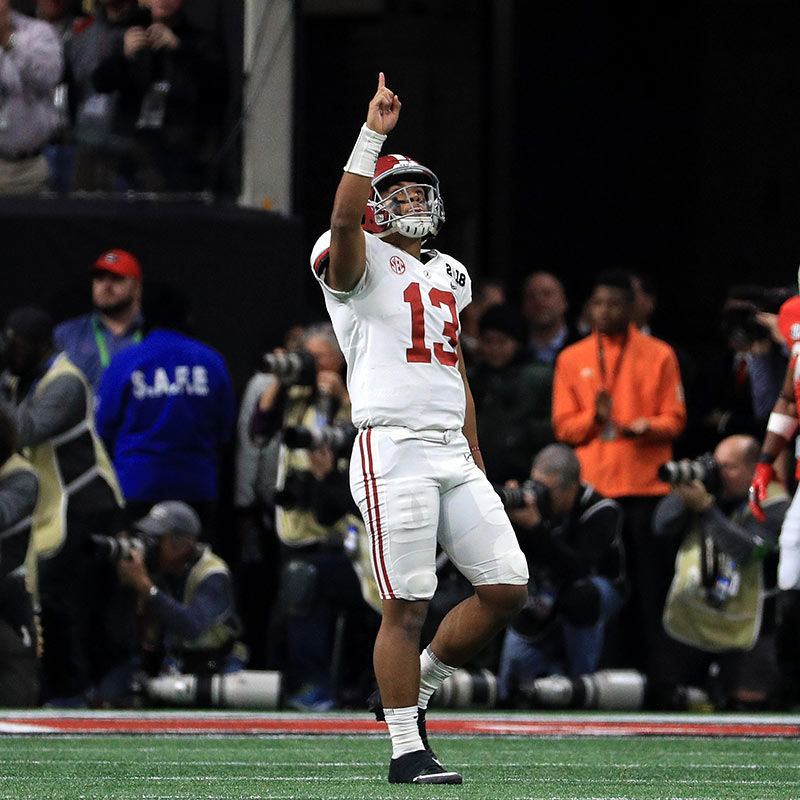 What I Would Say to Saban, Tua, and Hurts

Congratulations on both a National Championship and an incredibly entertaining game for football fans everywhere! It doesn’t get much better. I certainly experienced a rollercoaster of emotions and that was on my couch with no ties to either team. I never had the chance to be a part of a game of that magnitude so I can only imagine what the atmosphere, the locker rooms, the sidelines, and the field must have been like. There is a time for everything, and now is the time for you to celebrate. Enjoy it!

When that time settles down and space arrives for some reflection, I want to offer a few thoughts for you to consider.

Tua Tagovailoa, what a throw! That was fun to watch. And as a football nerd, I loved hearing you share the X’s and O’s behind the last play. Thank you for repping our Lord and Savior, Jesus Christ. Truly without Him, nothing is possible that is worth anything. But with Him, anything can bring Him glory. Thanks for using the stage He gave you to not be ashamed but to proclaim His name. He will not be ashamed of you.

However, I offer an admonition. I’ve seen far too many in your shoes do the same thing, only to turn their backs in defeat. Make sure you trust and praise Him on the mountaintop and in the valley. Your performance was stellar, but as a minister to college athletes, I know all too well the dangers of success. I hope you continue to find your identity solely in who God says you are in His Word, not in your athletic performance and the opinions the media has about it. Those things can change. Those things will change.

What Jesus says about who you are never will.

Coach Saban, congratulations! What a legacy of coaching you are building. I was so glad to see and hear you sound so happy after this victory. Through many TV screens I have watched you put your life into football with excellence and value it so much. Yet, I find myself wondering: Is it possible you value it too much? Is it too central in your life?

Those are questions only you can answer. But I cringed a bit when I heard you say this was the happiest you’ve ever been in your life. Again, that’s a personal thing for you, but I cringe because I know football is transient, temporal, fleeting. Eventually, a new champion will be crowned and your career will one day come to an end. And if it has become the ultimate in your (or anybody’s) life, it will leave you empty.

I know this because the same has happened in my life. No, I haven’t won 6 college football National Championships. But I daily allow created things—good things even—to become ultimate things in my life. The Bible calls this idolatry, allowing anything other than God to reign supreme in the hearts of men. These things were never meant to be in that place in any of our hearts. God alone can bring true satisfaction, fulfillment, and purpose, a victory that goes beyond any competition.

So I hope you can be incredibly happy about this win, but that you find and experience true joy that will last well into next season and even endure through the next loss.

Finally, Jalen Hurts. I tip my hat to your class, poise, and team-first attitude. Without knowing your heart and only being able to see what you portrayed on national television, I’d proudly shake your hand if I had the opportunity. I know the pain of being benched.

I can’t imagine the pain of it being on that stage and having the one who steps into your position wind up as the MVP. But the class you showed as you celebrated with him, spoke about him in the post-game interview, and came in on the second to last play in regulation to run for negative yards and move the ball over a few feet—that was all tremendous!

Thank you for bringing to light a maturity rarely witnessd at your age. I hope you know that what you do on the field—whether good or bad—does not reflect who you are. Your performance does not define you. Well, sadly it does in the eyes of some, but not in the eyes of the most important One, the One who made you in His image to reflect His glory. He says you are worth knowing and loving simply because He made you and He proved this not just to you, but to all of us by sending His own Son to die in our place, while we were still sinners! At our worst, He best displayed His love.

So regardless of how well you perform in the future, may it be in the freedom that you are loved. Period. And may it continue to be with the refreshing sense of class that made you a National Champion.

Tyler Stowell serves with Athletes in Action as a Local Team Leader on the campus of Rutgers University. He played football at the University of South Florida. He and his wife Allison have two daughters, and he continues on as a faithful sports fan of Tampa Bay teams.
See more from this author >>