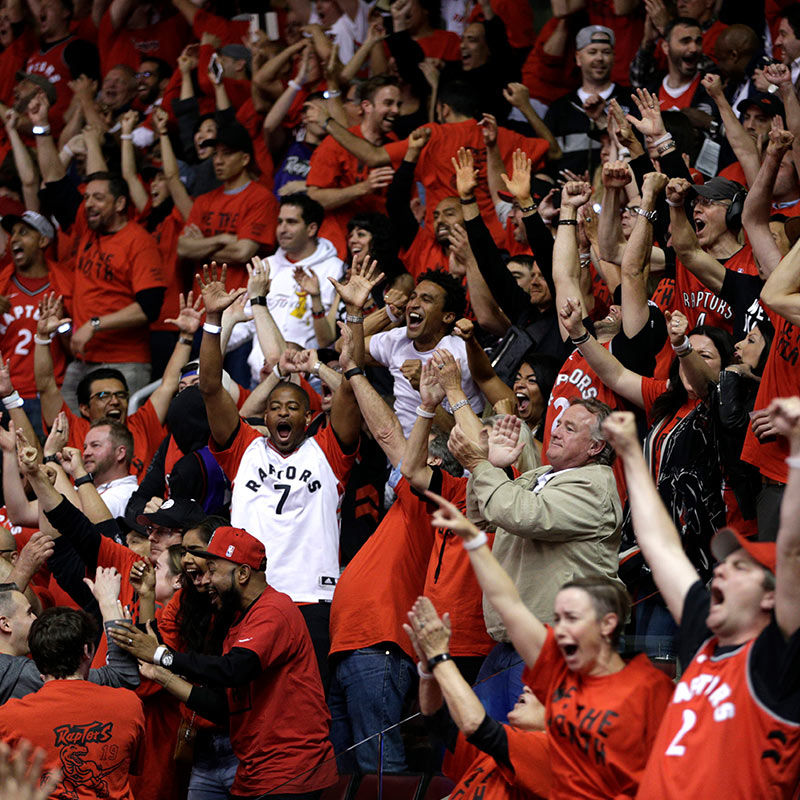 I love the slogan. I absolutely love it. Such unity, identity, loyalty, commitment. If I lived in Canada, I’d be all in. I don’t know if the entirety of the Great White North is behind the Raptors or not, but it wouldn’t surprise me, since they are the country’s only member of the NBA.

Regardless, they are all in and it’s compelling. They are on the brink of something unprecedented for their team, something special, something any sports fan hopes for. But, they failed as fans Sunday night. Or, at the very least, their hearts were exposed. The chase of a championship brings out the best and worst in not only the players and coaches, but also fans.

By now, I’m sure most reading this have either seen or heard the reaction of the fans to Kevin Durant’s 2nd quarter injury. The cheers and taunts towards a fellow human being in pain made plenty of headlines. Yes, they did indeed respectfully applaud his courage as he left the court at the bidding of Raptors players, but I want to focus on the initial reaction.

The question that kept ringing in my mind was why? Why did they react so strongly, so excitedly, so disdainfully at the suffering of another human, albeit an opponent? What inside their hearts moved them to such extremes?

I would submit that it was the allure of a championship. And I wonder if that allure had become an idol in their hearts, such that when a potential obstacle towards obtaining that championship (an opposing player) had been removed, they reacted with great joy that turned into gross derision.

But what’s an idol?

“An idol is whatever you look at and say, in your heart of hearts, ‘If I have that, then I’ll feel my life has meaning, then I‘ll know I have value, then I’ll feel significant and secure.’”

Consider the prophets of the false rain god Baal in the Old Testament story found 1 Kings 18. The land was in a drought, and the people of God had turned away from Him to an idol, the rain god of the surrounding nations. The allure here makes sense, given that there hadn’t been any rain in three years.

Elijah, a prophet of the Lord, had challenged them to a cook-off of sorts. Each would prepare a sacrifice and call on their deity to answer by fire. The one who answered by striking the sacrifice ablaze with flames would be considered God.

The prophets of Baal prayed and sang and danced all day long to no avail. Then, they began to cut themselves with their swords in a desperate effort to get Baal’s attention. Again, no luck. (For what it’s worth, Elijah then prayed to the God of Heaven who resoundingly answered by fire.)

Now that sounds extreme. But let’s consider for a moment what a modern-day example would look like. Think for yourself: What are the extreme measures people in society take for attention, praise, success, satisfaction, meaning, and love?

What are the extreme measures you take to get those things for yourself?

Cheering and taunting another human being who is in pain and agony is a likely indicator of an idol.

What might possibly be an idol for the Raptors fans of the North? The championship and the status, identity, and bragging rights that go with it. What makes that case from my perspective? Their reaction in a high-intensity moment: excitement over the injury of another human being, treating him as an object, one that was now out of the way of obtaining their idol.

Now, do I know what’s truly in their hearts? Nope. That’s between them and God. And I’m not down on their emotions or excitement about winning a championship. They’d better be wanting their team to win! That’s what being a fan is about! But, there is an extreme. And I think they hit it. Their emotions were just a clue into that.

To be quite honest, any insight on idols here is not because I’m a mind-reader. It’s because I’m a human, too. I’ve had a lot of help from much wiser friends to discover the idols in my own heart, including the ones that get exposed in the arena of sports.

Toronto fans, you are not alone. You are simply human.

So what about you, sports fan? In moments of heated competition for your favorite teams, what idols are rising to the surface in your own heart? How do you find yourself viewing the opponent? The other team’s fans? The referees?

Before the next sporting event you watch, take this lesson from our friends to the north: check your heart.

Show me how
Tyler Stowell serves with Athletes in Action as a Local Team Leader on the campus of Rutgers University. He played football at the University of South Florida. He and his wife Allison have two daughters, and he continues on as a faithful sports fan of Tampa Bay teams.
See more from this author >>