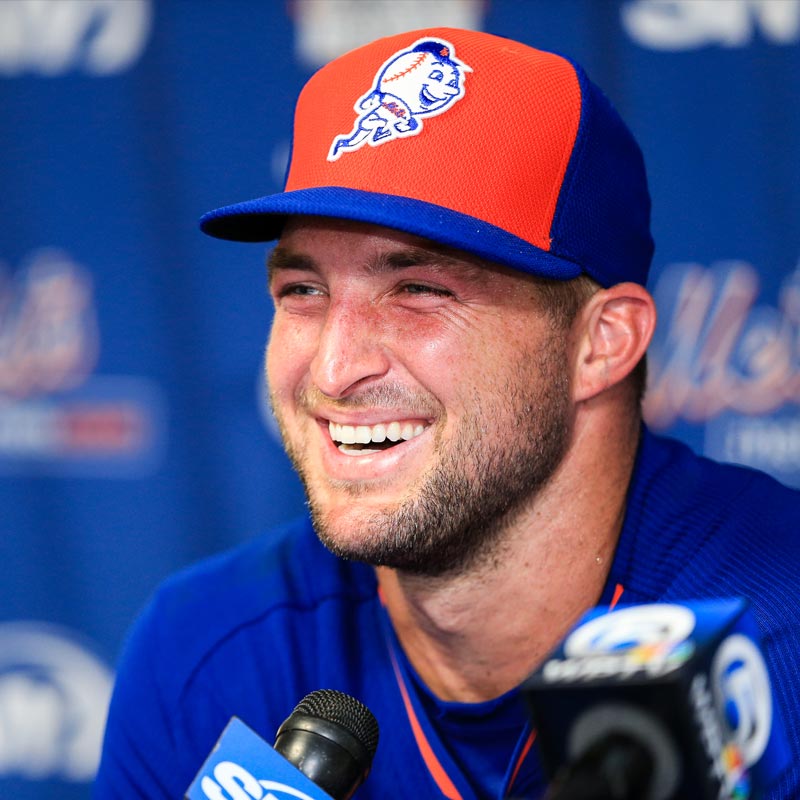 Tim Tebow Reminds Us It's Just a Game

When speaking with sports media, Tim Tebow has practically mastered the art of preaching without sounding self-righteous, teaching while still sounding like a learner, and competing for the athlete’s crown while always making clear that he’s bowing to a completely different King.

This week he arrived at the New York Mets’ Spring Training camp in Port St. Lucie, Florida, and as many have come to expect, was dishing perspective right out of the gate.

7 Habits of a Grateful Athlete
by Brian Smith
from athletesinaction.org

In response to one reporter’s question, “How do you balance your career and your charity work?,” Tebow took five sentences to put sports in its proper place, by articulating what seems so obvious and cliche yet still sounds so fresh and foreign in a major-sport interview setting.

“So much of handling sports is handling pressure. Well, what pressure do you have if you’re 0-12 and you’re at the plate versus someone that is fighting for their life? Versus someone that we picked up on the side of the street in Haiti because they were crippled or they’re not wanted or they’re thrown in the garbage? How do you compare those things? For me there’s not a comparison.”

Perhaps part of what gives Tebow’s words a sense of gravity compared to other athletes who on occasion attempt to articulate the relative lightness of sports is simply this—he’s actually been to Haiti, picking up people on the side of the street because they weren’t wanted.

He can say it and mean it—and have it mean something to others—because he’s smelled both the aroma of worldly success on the field after an NFL playoff game and the aroma of festering death in the streets of poverty and misery.

Ten Reasons to Give Thanks
by Ed Uszynski
from athletesinaction.org

He went on to introduce another concept that rarely gets engaged in the interview room—life purpose and calling in contrast to the pursuit of vocation.

“And that’s why you’re able to handle sports as a game because it still is. Yeah, we can pursue it, we can give so much of our time, energy, and effort to it, but at the end of the day, I know that’s not why I’m here. That’s not my biggest purpose, it’s not my biggest calling. It’s not how I want to be known in my life—not as a football player, as a baseball player. As someone that worked hard to accomplish those things. I want my life to be so much more than that.”

And his “so much more than that” purpose?

“I want to be someone that was known for bringing faith, hope, and love to those needing a brighter day in their darkest hour of need. And that is something that is a life calling for me and so it’s so much bigger than sports. But I am so grateful for sports because it’s given me a platform to be able to share and love and care for people all over the world so, I wouldn’t trade that for anything.”

Love him or hate him, no matter your critique of his career as a player or representative of Jesus Christ, he’s not afraid to tell you who he serves nor who he belongs to, and like Jesus himself, it’s hard to hear his words and leave feeling unchallenged.

Ed Uszynski has a PhD in American Culture Studies and has worked with AIA since 1992. Ed can be reached at ed.uszynski@athletesinaction.org and follow him on Twitter at @Uszynski32.
See more from this author >>