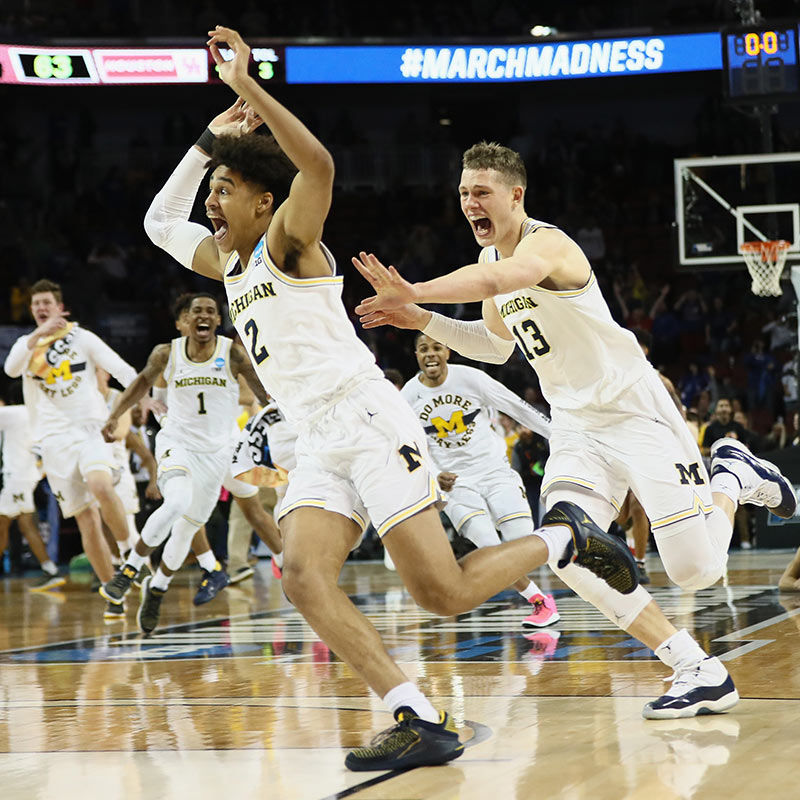 It was a classic March Madness scene. Down two. Only seconds left on the clock with the length of the court to go. Somehow the team trailing gets a prayer to go through the hoop as the buzzer sounds—and chaos ensues.

This time, the moment came courtesy of Michigan’s Jordan Poole, who knocked down a three as time expired to give his squad the win and secure their spot in the next round of the tournament.

But as the Wolverine’s collectively stormed the court, another moment, missed in the celebratory madness, was caught and recorded by someone on the sideline.

As Houston’s Cory Davis watched in disbelief along the sideline, he was met by an unlikely visitor. Mo Wagner, a forward for the Wolverines known for his grit and sometimes chippy play, stopped pursuing the chaos and momentarily reengaged his opponent.

I really enjoyed watching Houston’s Corey Davis compete. And then he suffered this.
Man.
But then a classy move from Mo Wagner.
What a way to finish in Wichita. pic.twitter.com/CHZqeq7lWp

The moment is worth championing on multiple levels.

God created us to celebrate when things go well. It completes the experience. To neglect the opportunity to celebrate would leave us feeling like we had one final piece of a puzzle that we just decided not to fit into place. There is nothing wrong with the rest of the Wolverines chasing each other around the court. You can even see Wagner start the celebration process.

But then he presses pause. Why?

I have no idea. I can guess, but ultimately, I don’t know why he stopped.

That’s a large reason why this moment was so beautiful. It was not normal or expected. It was not scripted. You can tell from Wagner’s body language that he did not start running with the intention of stopping to chat with Davis. It certainly wasn’t to mock Davis.

Something more like competitive empathy. Athletic respect toward a fellow player who competed at a high level and helped bring out everyone’s best. Understanding born out of his own experience with losing. A genuine compassion extended to the vanquished—perhaps out of relief that he wasn’t having to suffer the emotions that come with Davis’ fate. A simple display of class. Whatever—it was something worth noticing.

But moments like these make sports so captivating for us. Against the backdrop of the Madness, snapshots of compassion and empathy continue to capture our attention—and keep us fixated to see what could potentially happen next.