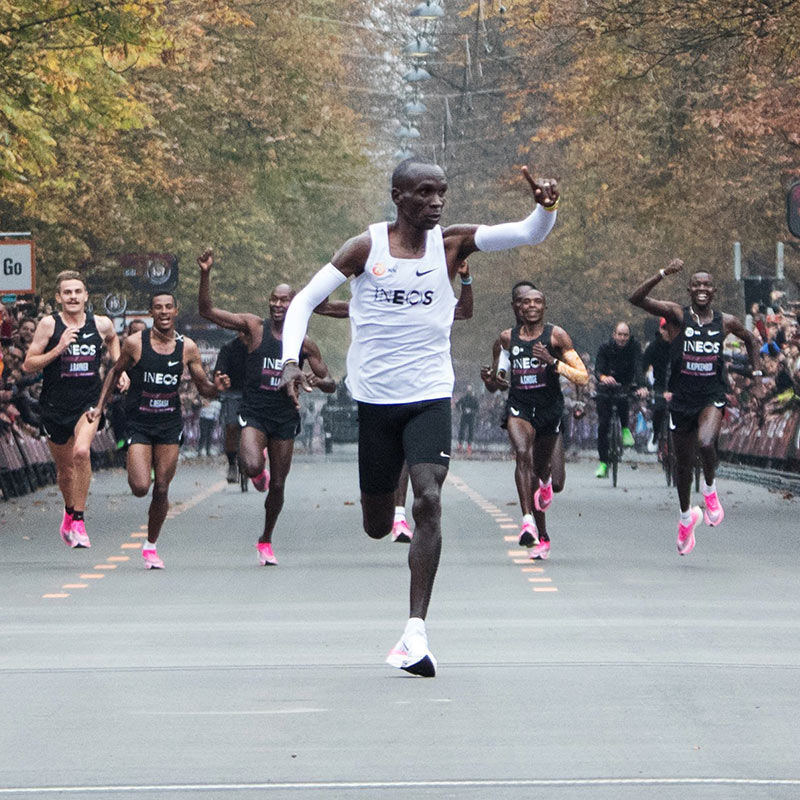 On May 6th, 1954, Roger Banister became the first man to run a mile in under four minutes, a barrier once thought to be unbreakable. Since then, hundreds of athletes have dipped under four minutes in the mile. Banister’s breakthrough helped generations of athletes to rethink what was possible and to push beyond their perceived limits.

As the marathon has increased in popularity, conversations about how fast that 26.2mi distance can be covered have increased too. Over the years, the sub-two hour marathon became our generation’s own “sub-four-minute mile” barrier. Many thought it was unachievable; others thought it was, but that we wouldn’t see it for years to come. In recent years there has been a growing interest in seeing the two-hour barrier broken. That interest peaked last weekend when Kenya’s Eliud Kipchoge was the lone competitor in the INEOS 1:59 Challenge.

This event was set up for the sole purpose of breaking the two-hour barrier. Kipchoge, the current world record holder (2:01:39) had competed in a similar attempt in 2017 where he narrowly missed history as he ran 2:00:25 (rotating pacemakers and other conditions don’t allow this to be ratified as an official world record). With the world watching, Kipchoge crossed the finish line Saturday morning in Vienna, Austria in 1:59:40. A barrier broken; history made.

While this doesn’t count as an official world record and many have been critical of the attempt as they claim it was too engineered (specially made shoes just for Kipchoge, pacemakers, course layout, etc.), Kipchoge’s feat was astounding. To put it into perspective, let’s look at a few numbers.

As I watched the highlights of the run and my social media feeds blew up with news of this historic feat, I was struck by the community of people around Kipchoge who helped make this accomplishment possible. While one man broke the barrier after years of training and personal discipline, he did not reach that point alone.

If you watched the event, you noticed the rotating groups of pacemakers who guided him along the course. Forty-one elite athletes, a group that consisted of Olympic and World Championship medalists, not only served as pacemakers, but ran in such a way that they shielded Kipchoge from any wind, conserving his energy and giving him a better shot at the record. He also had a personal assistant on a bike handing him fluids throughout the race.

The bottles were kept and were recorded to see how much he drank in order to ensure proper hydration. Coaches, family, fans cheering him on along the way, engineers for the shoes, and others all played a vital role in this achievement. Needless to say, this would not have been possible had Kipchoge not had a community of people around him.

The importance of community in our lives is a theme we see often in Scripture. We see it in the beginning with the garden narrative. God gave Adam a partner, Eve, because “It is not good that the man should be alone” (Genesis 2:18). We see examples in the wisdom literature:

“Two are better than one, because they have a good return for their labor: If either of them falls down, one can help the other up. But pity anyone who falls and has no one to help them up. Also, if two lie down together, they will keep warm. But how can one keep warm alone? Though one may be overpowered, two can defend themselves. A cord of three strands is not quickly broken” (Ecclesiastes 4:9-12).

“Iron sharpens iron, and one man sharpens another” (Proverbs 27:17).

And we see community in Jesus' own ministry too. In Luke 10, Jesus sends seventy-two of His followers out on mission. Jesus does not send them on their own, but in pairs. In Matthew 18:20, Jesus reminds us that where two or three are gathered in His name, He is with them.

What in your life do you want to see happen this year? Maybe it is breaking through an athletic barrier you once thought impossible, or raising your GPA half a point, or even seeing your team and athletic department reached with the Good News of Jesus.

Have you considered those people God has put in your life to “run” through it with you, those who can carry your burdens (Galatians 6:2) and those who can join you in pursuing the things God has laid on your heart? Seek those people out, seek consistent fellowship, and with that community around you, seek the Lord.

Regardless of the endeavor you set out for, it is imperative that you do so with others. Consistent and sustainable growth in life requires community. Whether it be in athletics, academics, your physical and mental health or your faith, we need others in our lives in order to grow. We weren’t created to walk (or run) through life alone!

Learn the importance of having a community.

Show me how
Mason Blevins is new staff with Athletes in Action Track and Field. He graduated from Morehead State University in 2018 where he ran cross country and track. He still enjoys running and training for marathons, but has started to enjoy cycling as well. He lives in Xenia, OH.
See more from this author >>